Why is high output at low RPM Important? 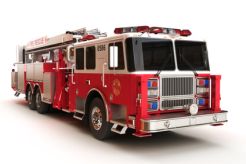 The power output curve of the perfect alternator would be flat, i.e. it would generate the same power regardless of its RPM’s. Generally vehicles have a constant electrical load regardless of speed, except for vehicles that perform their mission at the work scene, such as fire and fire rescue trucks, utility company bucket trucks, airport shuttle buses, trucks with Telma braking systems, school buses that have wheel chair lifts and/or air conditioning, and ambulances. These vehicles have their greatest need for electrical power while either at idle or, in the case of shuttle buses and Telma equipped trucks, at low engine speeds, just when the output of conventional alternators are least able to satisfy vehicles’ electrical loads. Trolling fishing boats have similar low RPM electrical needs.To overcome typical alternators’ low output at idle, either or both of the following are generally used: high idle systems that cause the vehicle to rev up only for the purpose of generating adequate electrical power and/or extra batteries that provide a larger reservoir of power that can be called on when alternators’ electrical output cannot satisfy the electrical load. Both of these band aid fixes have disadvantages:

In many of the applications listed above, where output at low speed is most important, Eco-Tech high output at low RPM alternators can provide the electrical power needed, so that these vehicles can perform their missions more cost effectively while making both the revving up engines and the use of extra batteries unnecessary. Eco-Tech patented low RPM alternators excel in applications where high electrical output is needed at low engine RPM’s.